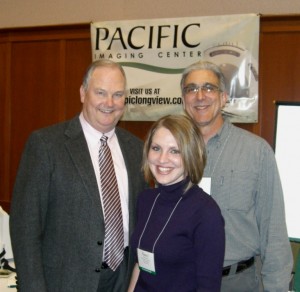 Berry, Director of Imaging Services at PIC, provided chiropractors with information about axial-loaded MRIs of the lumbar spine.

“They were very interested in viewing the images,” Berry said. “They could clearly see the stark difference and degree of disease between a non-loaded image and an axial-loaded image. They were especially pleased to learn that PIC does not bill extra for axial-loaded images.”

Pacific Imaging Center uses a device called the DynaWell L-Spine to simulate the axial compression on a patient’s spine when standing. Problems that would ordinarily remain undetected with standard MRIs are more likely to be detected with the use of this unit.

“We stressed that we are providing chiropractors with another tool to keep their patients from having needless surgeries or expensive visits to specialists,” Berry said. “At the same time, we made it clear that an axial-loaded MRI may reveal problems that require a referral to a neurosurgeon.”

Dr. Clay Barness of Longview Chiropractic was one of several area chiropractors who attended the conference. “I was impressed with the contrast between a regular MRI and an axial-loaded MRI,” Bartness said. “You could see that what was missed on the first MRI was picked up when the MRI was done with axial loading. I can see certainly see where this would be very helpful to us as chiropractors in dealing with disc conditions.”