Jack Berry of Pacific Imaging Center joined nearly 300 other mountain bikers for four days of riding last month near Oakridge, Oregon. Mountain Bike Oregon, which ran from July 16-19, drew bikers from around the nation and several from overseas.

More than a dozen riders from Cowlitz County attended the event. The group covered approximately 70 miles of trail.

“We camped together and had a great time,” Berry said. “The trails we rode featured everything from old growth to screaming downhill to alpine meadow with big exposure.” 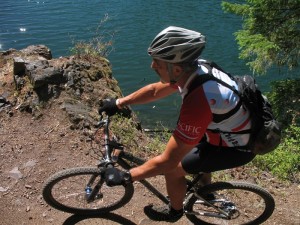 Berry, who has a well-deserved reputation for going over his handlebars, escaped serious injury on this trip.

“Based on Jack’s history, I expected to have to treat him when he returned,” said William Turner, M.D., of Longview Orthopedic Associates. “He has a habit of breaking bikes and bones.”

Berry and other local mountain bikers have also been involved in several trail maintenance projects this summer near Mount St. Helens. In June, they cleared four miles of South Coldwater Trail 230A and in July they brushed the upper portion of the Ape Canyon Trail.

The video below shows a portion of the Larison Rock downhill, which Jack and friends rode on day one of their trip. The trail features several thousand feet of descent over six miles through old growth forest. It’s steeper than it looks.